Home | Blog | The Future of Interaction Design With Noessel and Hendrie

The Future of Interaction Design With Noessel and Hendrie 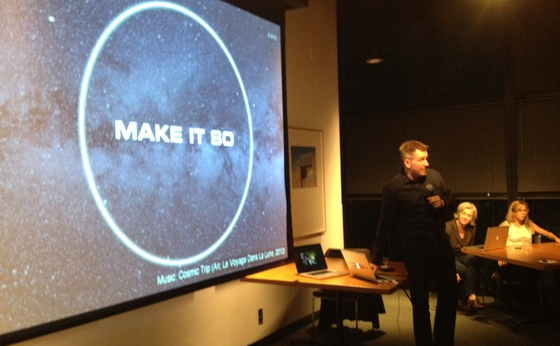 The Los Angeles web design community focused on the future of interaction design last week at Art Center in Pasadena. Two speakers took the stage to discuss what users can expect in the near future for user experience (UX), interaction and visual design. The first speaker, Maggie Hendrie, is a user experience designer and educator, who is the Chair of Interaction Design at Art Center. She highlighted some student and graduate work from Art Center IxD students to see how social and creativity have become central to their practice. The main speaker of the night was Christopher Noessel (@chrisnoessel) who recently co-authored the book Make It So: Interaction Design Lessons from Sci-Fi. He discussed the relationship of design to science fiction, and how sci-fi continuously inspires people to be more innovative with interaction design. The Media Contour team had the opportunity to sit down and talk with both before the show, here are the main ideas:

Mobile Design and Beyond

The first topic Luke Swenson asked the pair to talk about was what is next after mobile design. He noted an increase in business for website design on a mobile interface but what’s the next big technology that will further improve user interaction?

Chris Noessel is excited about future technologies and began, “I think that the Leap Motion millimeter-wave gesture recognition is going to be super promising. Now that we can read fingers it’s going to get a lot more interesting as far as gesture recognition, and we’ll be able to maybe even sort of meet sci-fi at what sci-fi has been promising for that sort of thing.”

Gesture based technologies sound fun and futuristic but it’s not what Noessel is most excited about. He is interested in eyes. “I am most excited about our eyes because there are two technologies that, I believe, are on the verge of breaking through, that is going to change our experience with technology. One is “gaze monitoring.” It’s been around in art for twenty years.” He then explained the method of how it works, involving infrared LED monitors that triangulate gaze. As a pointer on a screen, this would be far more efficient than a mouse. “I think we’ll be able to relate to computers a lot more when they know where we’re looking, especially given that we’re entering a world of multiple devices, multiple screens, and multiple touch points. Knowing where I’m looking is pretty critical and computers will be able to know that,” said Noessel.

The discussion of future technologies led to trying to discover how customers will be reached by brands in the coming years. Many references to the Google Glass project were made because of the bridge it has built between mobile interfaces and a eye-projected interface.

Maggie Hendrie began with this important point to consider, “A lot of technologies exist today that we just don’t use. So near frequency, RFID, Bluetooth..you know the fact that we still have so many connectors instead of bluetooth-ing a lot more is kind of untapped but I do agree that the opportunity to have a personalized, visual experience is new for people. People have had the data experience or a promotional experience or a mobile experience but they haven’t had an immersive visual experience outside of gaming and it could naturally focus our attention in a way that our devices used to distract our attention.”

Hendrie theorized another good point after she had brought up the patent case issue between tech-giants Apple and Samsung. The issue was over a patent Apple had made for its “pinch” screen gesture which led to Hendrie asking “What happens when people patent our gestures?” She continued, “There’s an increased understanding of the connection between design innovation and IP creation, right? A lot more people are investing in IP creation, they’re beginning to invest in design innovation.” Her next call was for designers to be conscious of picking the best medium for their work. In science fiction technologies are functioning in an ideal world where the technology in real life is just now being realized. “Again I think that’s going to be the role of designers is choosing the right interactive medium for the desired outcome.”

How Businesses Can Conceptualize Ways to Reach Consumers

The last major idea Luke asked Chris Noessel and Maggie Hendrie to touch points on was how a business can conceptualize ways to use technologies to reach consumers. It may be hard for a client to understand the best way to implement new technologies into marketing efforts and ultimately what will the adoption curve rate be of these new technologies.

Noessel began, “We often ask our clients to do one of two things. One: Imagine its sci-fi…sci-fi is a language in and of itself. For example, imagine it’s in Minority Report, or imagine it’s in Star Wars. That frees them up from the constraints of “what can be done” to what would be awesome? What would be useful?”

Hendrie added that when meeting with clients there are always two big questions to ask and consider. The first question is “What business are you in?” and the second is “What kind of organization are you?” It comes down to what kind of opportunities are available to your type of organization.

The round table interview ended on a positive note with many delightful insights on the future of technology as a business tool. Many thanks to Art Center in Pasadena and Jon Fox and Petra Wennberg Cesario of NorthEast LA User Experience (NELAUX) group who made it possible to interview Maggie Hendrie and Chris Noessel.

Christopher Noessel’s new book Make It So: Interaction Design Lessons from Sci-Fi is available on (http://rosenfeldmedia.com/books/make-it-so/)