Home | Blog | A Lesson In Localization With Huge Los Angeles

A Lesson In Localization With Huge Los Angeles 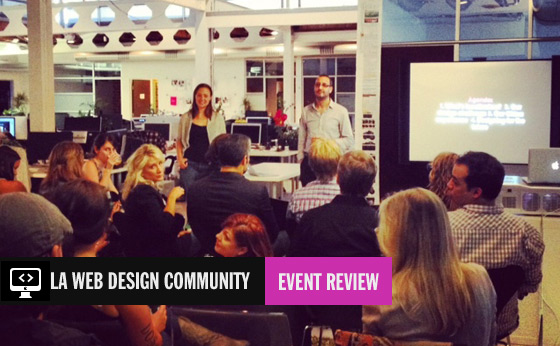 Technology of the 21st century has connected the world in some pretty unimaginable ways, however, it has not changed each country’s individual culture. When developing your website you must keep this in mind. On July 31 members of the Los Angeles web design community received a lesson in localization. Todd Lefelt and Kate Pendley of Huge Los Angeles discussed important considerations for localization and culturally sensitive design.

“This is about anything from currency convertors to colors to socially appropriate imagery,” said Kate Pendley describing the range of elements one must consider when communicating with a global audience. Todd Lefelt added, “Symbols mean different things in different countries.” An example shown was ‘thumbs up’ which carries a different meaning based upon the country you are in.

The specific case study presented to the LA web design community was Sigma-Aldrich, a life science technologies and speciality chemicals supply company for laboratories. The goal of their web design team was to create a localized website for the Chinese division of the Sigma-Aldrich website and also create an understandable e-commerce experience to replace the traditional catalog used by the international company.

“Our initial approach to doing the landscape analysis was ‘we don’t want to go in knowing nothing’ obviously we want to educate ourselves as much as possible so we go in with some familiarity about best practice for Chinese design,” said Todd Lefelt. The team began by researching popular e-commerce sites in China.

“The secondary research really actually evolved from doing the landscape anaylsis,” Kate Pendley said, “we started digging into mostly research and academic journals and some business cases coming out of large corporations.” This stage allowed the team to take note of trends in which it seemed a number of companies in China follow the same web design principles. Common features of these sites were information-dense pages and different forms of navigation.

After becoming familiar with Chinese design trends; the team hopped on a plane to China and met with scientists in the laboratories. “It’s almost like asking them to give you a tour of their digital life,” said Todd Lefet, “we tried to make it observational.” The team had moderators between themselves and the scientists to clear up any language issues. The hands-on research allowed the team to see how a person in China usually behaves in terms of navigating the web. “They do want everything upfront and that included from general shopping to shopping on the Sigma-Aldrich site,” said Kate Pendley. In the realm of e-commerce Chinese users are more comfortable with websites stating all possible product information.

“Navigation, information architecture are super important considerations when you go into a different culture,” said Kate Pendley. An important factor was the layout of the page, as Americans scan left to right, Chinese users fixate in the inverse of Western users and scan in more circular patterns.

The night consisted mostly of web design trends in China but the Los Angeles web design community still received a world of knowledge in localization. A great social index system was discussed to highlight the ways countries are culturally different from each other. This system is Hofstede’s Cultural Dimensions which include:

Some examples mentioned from above were how the Chinese are long-term oriented in their goals and do not require instant gratification that has become so commonplace in the United States. Another significant difference between the U.S. and China was how Chinese culture is more collectivistic. “It’s about the group, there’s a low emphasis on individuality where in the United States obviously the word is ‘I’ and ‘me’ and ‘mine'”, Pendley explained.

The LA web design community had so much to take away from this event. Todd Lefelt and Kate Pendley provided excellent examples of how to prepare oneself for designing in the global sphere and how to follow through. Their teamwork on the Sigma-Aldrich website showcased efficient preliminary research methods, observational research methods used on the ground in China and even gave a lesson on Geert Hofstede. The evening was followed by a Q&A section for the audience to re-sharpen their understanding of the wealth of information presented during the show. Many thanks to Todd Lefelt and Kate Pendley of Huge Los Angeles for sharing their findings with the Los Angeles web design community!

Todd Lefelt is Managing Director, User Experience at Huge Los Angeles.  Since joining Huge in 2006, Todd has been instrumental in building the agency’s user experience team and helping to define the philosophy and processes applied to user-centric design.  In 2010, Todd joined Huge’s Los Angeles office, where he has played a key role in the development of the company’s West Coast presence.  Todd has directed interactive design and research for some of Huge’s largest engagements and has worked with clients including Clear Channel, National Geographic, NBC Universal, Samsung, Toyota, and Warner Music Group.

With more than a decade of experience in digital, Kate is an Experience Lead at Huge, where she oversees complex projects and works with clients to drive research and interface design.  She is highly skilled in leading projects with engaging features built around solid IA, as well as solving design problems where users need an approachable interface to navigate complex functionality.  Prior to joining Huge, Kate worked with a variety of clients including ABC, American Express, At&T, CNN, Disney, Gerber, Microsoft, Taco Bell, Yamaha, and USAID.

Huge is responsible for core digital strategy, marketing and implementation for some of the largest companies and brands in the world. Founded in 1999, the company has evolved a methodology and a culture that combines the most powerful aspects of research, user-centered design, technology and marketing to meet client objectives. The online businesses designed and developed by Huge generate over $12.5 billion in annual revenue and are visited by more than 375 million visitors each month. The company has nearly 500 employees operating out of New York, Los Angeles, San Francisco, Portland, London and Rio de Janeiro. Huge is a part of the Interpublic Group of Companies.