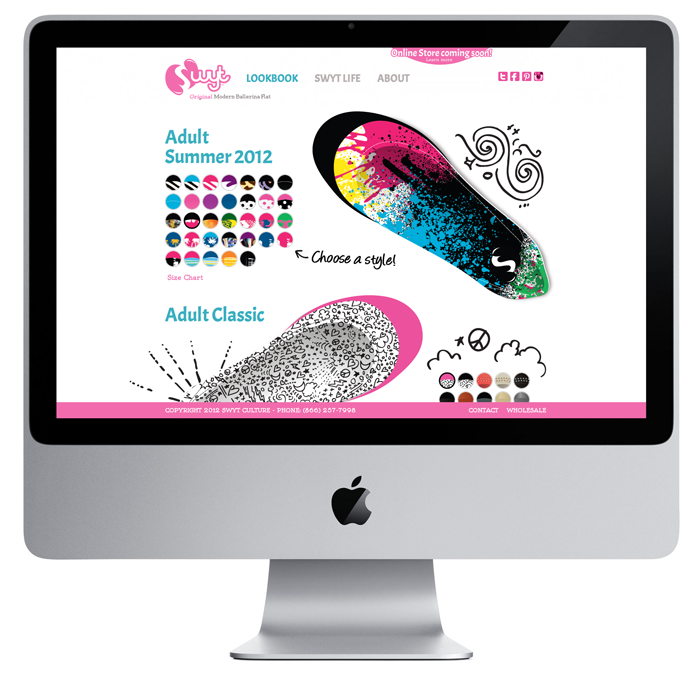 The Communicator Awards are judged and overseen by the International Academy of the Visual Arts (IAVA). The IAVA describes itself as “an invitation-only member-based organization of leading professionals from various disciplines of the visual arts dedicated to embracing progress and the evolving nature of traditional and interactive media.” Current members include acclaimed media, advertising, and marketing ﬁrms such as: Time,Inc., rabble+rouser, Lockheed Martin, Pitney Bowes, Airtype Studio, and many others.

Media Contour created an interactive lookbook page that features each of SWYT’s many designs in a quick, simple to use manner. Luke Swenson, the Media Contour’s Art Director and the designer of swytculture.com says “The lookbook serves as a fun way to present their different shoe patterns at trade shows and get customers excited about their product.” Small swatches of the shoes patterns are featured on the left allowing users to click through these swatches and see a larger version of each shoes style and pattern.

“Everyone around the office is buzzing about the award,” says Matt Dandurand, CEO of Media Contour. “We put a lot of time and thought into how the SWYT project should look and feel. We wanted it to be bold and catching to the girls checking out the shoes but also practical and easy to use for those buying the shoes, whether it’s the kids or the parents.”

Media Contour, is an award winning full service interactive studio specializing in both traditional website design and development. Based out of Los Angeles, Media Contour provides complete solutions for web design and programming, as well as branding, graphic design, print, and marketing services.