Home | Blog | Dr. Susan Weinschenk On How To Get People To Do Stuff, Pt. 2

Dr. Susan Weinschenk On How To Get People To Do Stuff, Pt. 2 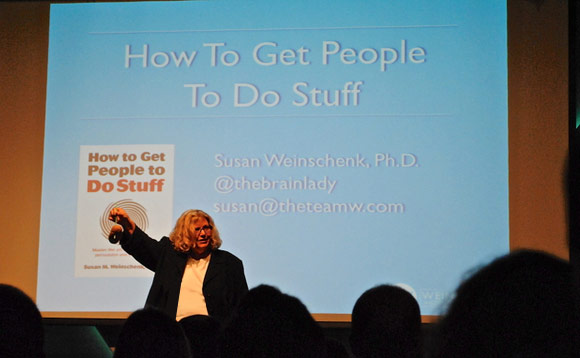 The LA UX Meetup on August 15 was just as much a lesson in psychology as it was an insight into user experiences and web design. The Los Angeles web design community was lucky enough to learn from Dr. Susan Weinschenk as she discussed her new book “How to Get People to Do Stuff“.

In addition to her Ph.D., Dr. Weinschenk has over 30 years of experience in behavioral psychology. She applies the discipline of neuroscience to figure out what it is that makes people tick and why they make the decisions they do. Clients have sought her help to implement plans of better communication and persuasion with customers. She has researched and written about ways to persuade for websites, presentations and many other mediums. The seven drivers of motivation highlighted at this LA UX Meetup were supported by her examples and inspired the web design community in attendance. Let’s take a look at them:

1.) The Power of Stories

“There’s research that shows us that the brain processes information best in story format, people will understand it better, they will remember it longer and they will be most emotionally impacted by the information if it’s in story format,” Weinschenk begins on her first driver of motivation. She notes that this is something most people are already aware of and goes on to explain the other aspect of power in stories, “We have stories that we tell ourselves, we have self-stories.” Self-stories are significant because it is how we communicate ourselves to others. If a company can change an individual’s self-story than it has the power to change that individual’s behavior or buying process. Her example was illustrated through her story about how she was once a PC person and then converted into an Apple person. Her first purchase was an iPod Nano. That caused a “crack” in her self-story of not being an Apple person. Now she was kind of an Apple person, which led to her purchase of the iPhone. Apple was able to change her self-story by getting her to purchase one product and then to purchase another and more. She concluded by saying she now owns an iPad, Macbook and Mac desktop computer and even an Apple TV.

This second motivator dealt with the unconscious and how we perceive things in daily life. Dr. Weinschenk shared Daniel Kahneman’s categories from his book “Thinking Fast and Slow. There are two types of thinking: ‘system one’ and ‘system two’ thinking. “System One thinking is quick, intuitive…effortless,” explains Dr. Weinschenk, “that’s our normal mode, we walk around all day thinking like this, most of the time.” She then showed a video to display the difference between these two systems of thinking. When you are thinking in a system two mode your eyes tend to dilate because of the heavy, more focused thinking. Another insightful note Dr. Weinschenk presented during this portion was “Most mental processing is unconscious.”

This portion was a nice lesson on the different parts of the brain and how they affect behavior. Humans all have three basic instincts: food, sex, and danger, and in order to motivate people to do things; these instincts can be tapped in finding different ways to reach people at a level in which we all share these basic human instincts.

This motivating factor is based on rewards. She uses an example of how a casino gives rewards to winners, but not every time. She warns, however, that of the seven motivators this is the weakest one, “It’s probably one of the less powerful techniques that I am talking about…use some of these other things, the power of stories, instincts.” She also warns that one should not use punishment because that only discourages, “It’s one of the least effective things you can do,” she said. Rewards are much more beneficial and are more effective in getting more of a behavior than punishment..

“We have an inherent need to belong to a group. We want to be social. We want to belong to groups. We are social animals,” Dr. Weinschenk said following a nice display in which she invited seven members from the audience to participate. Each member had a different percussion instrument. At first the sound was the very dissonant but as the group members looked around at each other, the sounds became more synchronous. This is tied to getting people to do stuff through the need to connect. People want to trust each other and the best way to get someone to trust is you is for you to first show them that you trust them. Once trust is established it gives companies and clients the chance to maintain a relationship which can continually improve business.

6.) The Desire of Mastery

This motivator refers to how people like to learn new skills and gain knowledge of new practices. This is a way to motivate people because it allows them to grow and reach new heights and will ultimately benefit them. Clients will become more loyal to your products and services once they see they are progressing in their skills and knowledge with a product. Achieving and learning new things establishes a sense of pride that allows people to brag and talk more about your company.

The easiest way to create a new habit is to anchor to an existing habit explained Dr. Weinshcenk. New habits can form in less than a week by using this anchoring technique. Breaking things into small steps is important to getting people to develop new habits.

The Los Angeles web design community sure had a lot to learn and apply after this informational session with Dr. Susan Weinschenk. Many thanks to the LA UX Meetup, Santa Barbara UX Meetup and the UX Book Club of Los Angelesfor hosting Dr. Weinschenk. Also thanks to the venue hosts at Cross Campus in Santa Monica.

If you would like to learn more about the 7 drivers of motivation be sure to check out Dr. Susan Weinschenk’s new book “How to Get People to Do Stuff“. This is her latest book and base for the night’s presentation but it is one of several other great books she has written, give them all a read!

For Part 1 of 2, the Susan Weinschenk INTERVIEW click here.